After the court ruling of the European Court of Justice (ECJ) on July 25th in 2018, a lot of confusion arose around whether plants obtained by new plant breeding techniques (NPBTs) such as CRISPR would be classified and subjected to laws for genetically modified organisms (GMOs) here in Europe. Many plant scientists, including us from GeneSprout Initiative, were under the impression that the court ruling implied that plants created with NPBTs would be considered to be GMOs solely based on the technique used. However, researchers easily misinterpret terms and definitions used in the legislation. A recent paper, published in the European Journal of Risk Regulation, tries to clarify the legal status of organisms obtained through these new breeding technologies. Here they conclude that for an organism to be a GMO in the sense of the GMO Directive (2001/18/EC), two aspects need to be considered: the technique used and the genetic alterations of the resulting organism. This means that the use of NPBTs does not immediately imply that plants obtained with these techniques are considered GMOs. If the genetic material has been altered in a way that does occur naturally by mating and/or natural recombination then these plants are not GMO and don’t have to be regulated as such. A schematic representation can be seen in the figure below. 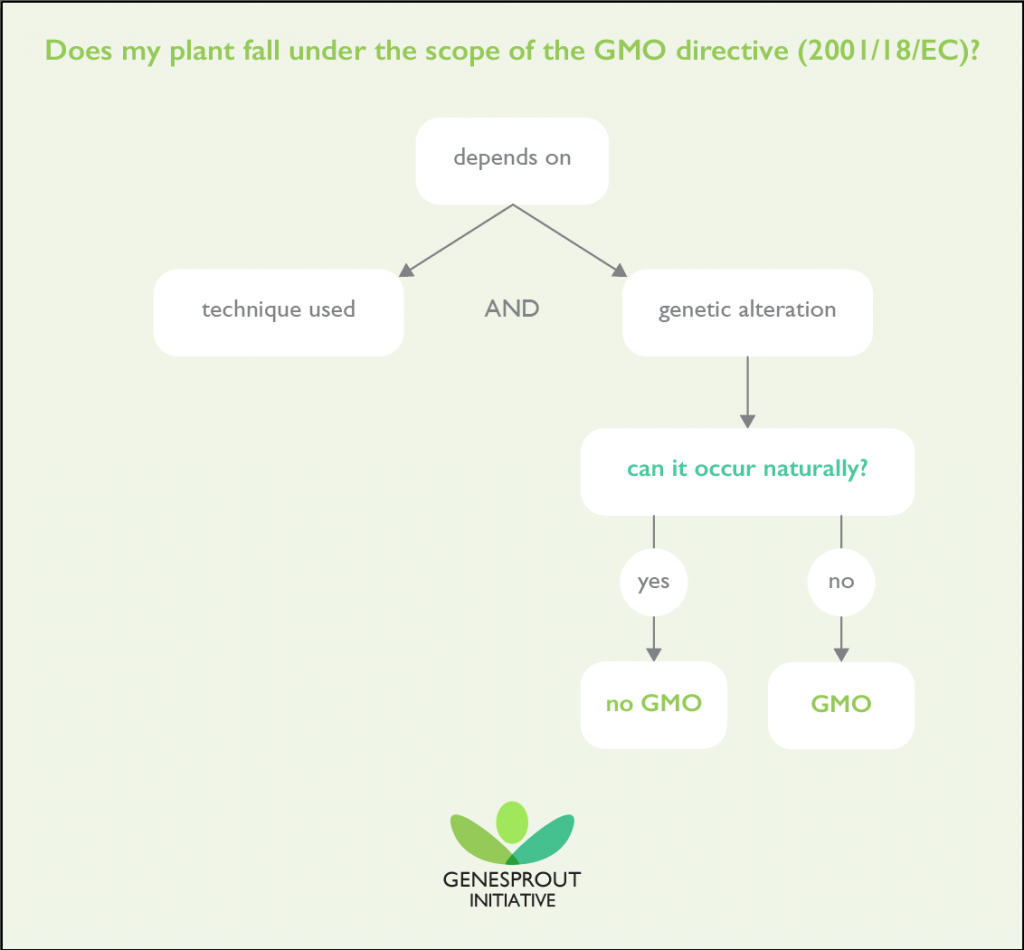 Following the scheme, the question arises: “can the genetic alteration, introduced with a certain breeding technique, occur naturally?”.  If we limit ourselves to plants edited with the CRISPR-technique the following scheme arises: 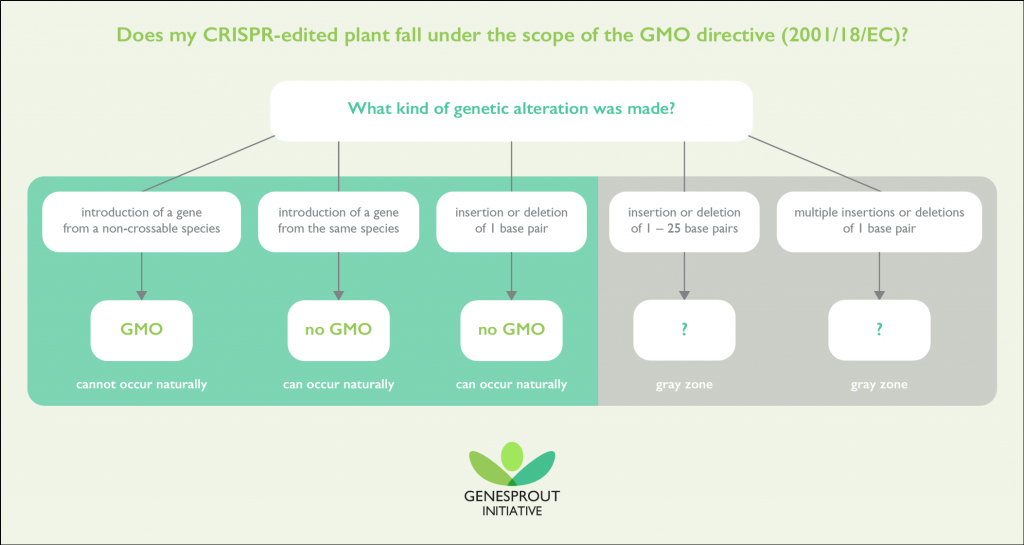 For some genetic alterations the answer is quite clear (shown in green). If a gene from a non-crossable species is introduced into the plants’ genome (transgenesis) we can speak of a GMO because this happens very rarely in nature. For example, introducing an insect resistance gene originating from bacteria into a maize plant results in a GMO. The introduction of a gene from the same plant species into the genome (cisgenesis) does not result in a GMO because this can occur naturally. For example, when a resistance gene against fungi from one apple variety is introduced into another apple variety it is not a GMO. One base pair changes in the DNA (insertions, deletions or small nucleotide polymorphisms) between different plants of the same species occur in high frequencies in nature. If such a change is introduced in a specific region of the plants’ genome, this genetic alteration should also not be considered a GMO. The grey zone emerges when larger or multiple insertions or deletions are introduced. This grey zone should be addressed more in detail by the European Commission and some clarification is needed to define where to place the limit of which genetic alterations occur naturally. These schemes are not complete but show the necessity for further clarification.

Recently the European Commission published a study regarding the status of novel genomic techniques under Union law. The study makes it clear that organisms obtained through new genomic techniques are subject to the GMO legislation. However, it also states that developments in biotechnology, combined with a lack of definitions (or clarity as to the meaning) of key terms, are still giving rise to ambiguity in the interpretation of some concepts, potentially leading to regulatory uncertainty. Furthermore, the study confirms that the current regulatory system involves implementation and enforcement challenges in the EU, relating in particular to the detection of products of new genomic techniques (NGTs) that contain no foreign genetic material. The study ended with the question if the current legislation is still fit for purpose or needs updating in light of scientific and technological progress. The study further stated that the follow-up to this study should consider possible policy instruments to make the legislation more resilient, future-proof and uniformly applied. Any further policy action should be aimed at reaping benefits from innovation while addressing concerns. A purely safety-based risk assessment may not be enough to promote sustainability and contribute to the objectives of the European Green Deal and in particular the ‘Farm to Fork’ and biodiversity strategies; benefits contributing to sustainability would also need to be evaluated, so an appropriate mechanism to accompany risk assessment may be required.

A group of experts replied to this study with the statement that the follow-up study should include an assessment of whether and which organisms obtained through the various NGTs are subject to the EU GMO legislation. This assessment should include:

This is in agreement with the unclarity regarding the grey zone stated above. With GeneSprout Initiative we wrote an open letter to the European Commissioner for Health and Food safety, to respond to the EC study on new genomic techniques. We welcomed the conclusions of the study and urge the Commission to propose further policy actions to enable the use of new genomic techniques to support the goals of the European Green Deal and Farm to Fork strategy by 2030. We asked the Commission to engage early-career researchers as stakeholders in the ongoing discussion. Our future, professionally and as EU citizens, will be decided by the ongoing policy developments. We received positive feedback from the Commissioner. Together with all stakeholders, we hope to gather new and joint perspectives on new plant breeding techniques that will help us shape the future of agriculture.